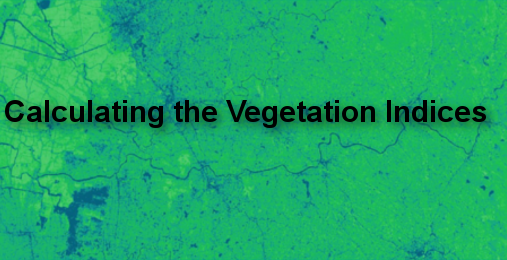 The Normalized Differential Vegetation Index (NDVI) is a standardized vegetation index which allows us to generate an image showing the relative biomass. The chlorophyll absorption in Red band and relatively high reflectance of vegetation in Near Infrared band (NIR) are using for calculating NDVI. ( From ESRI)

“An NDVI is often used worldwide to monitor drought, monitor and predict agricultural production, assist in predicting hazardous fire zones, and map desert encroachment. The NDVI is preferred for global vegetation monitoring because it helps to compensate for changing illumination conditions, surface slope, aspect, and other extraneous factors” (Lillesand 2004).

Monitoring the intensity and the density of the green vegetation growth can be done using the reflection from the red band and the infrared band. Green vegetation reflects more energy in the near- infrared band than in the visible range. It observe red band more for the photosynthesis process. Leaves reflects less in the near-infrared region when they are stressed, diseased or dead. Features like Clouds, water and snow show better reflection in the visible range then the near-infrared range, while the difference is almost zero for rock and bare soil.

Output of the NDVI method creates a single-band dataset that only shows greenery. Values close to zero represent rock and bare soil and negative values represent water, snow and clouds. Taking ratio or difference of two bands makes the vegetation growth signal differentiated from the the background signal. NDVI method was developed by the NASA scientist popularly known as Normalized Difference Vegetation Index (NDVI). By taking a ratio of two bands drop the values between -1 to +1. Table below shows the red and infrared bands reflectance values of features and their NDVI values. Water has an NDVI value less than 0, bare soils between 0 and 0.1, and vegetation over 0.1. Increase in the positive NDVI value means greener the vegetation.

Table shows typical reflectance values in the red and infrared channels, and the NDVI for typical cover types. Water typically has an NDVI value less than 0, bare soils between 0 and 0.1 and vegetation over 0.1.

Here we are using the Landsat image acquired from USGS Earth Explorer. The data is in GeoTiff format with 16 bit radiometric resolution (ranges from 0-65535). Landsat 8 Operational Land Imager (OLI) and Thermal Infrared Sensor (TIRS) images consist of nine spectral bands with a spatial resolution of 30 meters for Bands 1 to 7 and 9. The resolution for Band 8 (panchromatic) is 15 meters. In addition it also have two Thermal IR bands with a spatial resolution of 100m (later resampled into 30 m).Before calculating the NDVI the DN data must be converted to reflectance using the equations given in their website. Here the IR and NIR bands are 4 and 5 respectively.

M ρ = Band-specific multiplicative rescaling factor from the metadata (Reflectance_Mult_Band_x, where x is the band number)

A ρ = Band-specific additive rescaling factor from the metadata (Reflectance_Add_Band_x, where x is the band number)

(Metadata means the .txt file you can find along with the data)

I. Open ArcMap and add satellite images band 4 and band 5 for calculating NDVI. 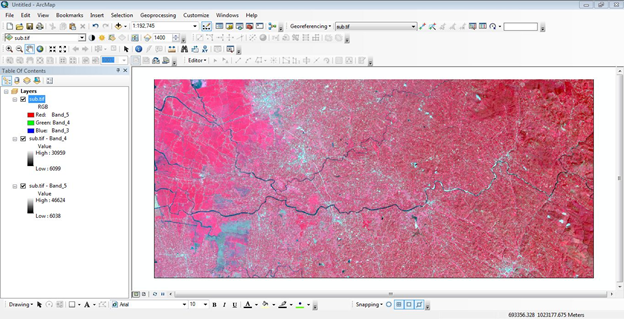 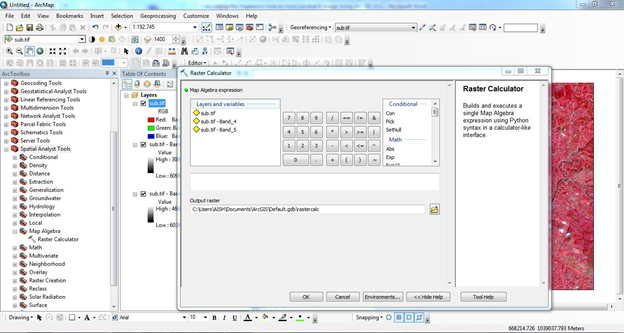 A ρ Band-specific additive rescaling factor from the metadata (Reflectance_Add_Band_x, where x is the band number) 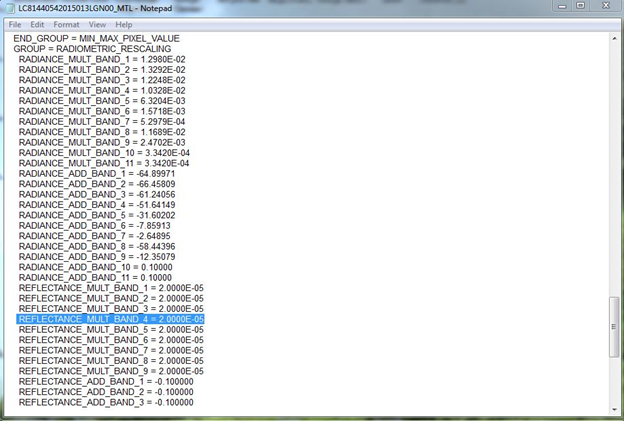 (Reflectance_Mult_Band_x, where x is the band number) is found within the metadata file 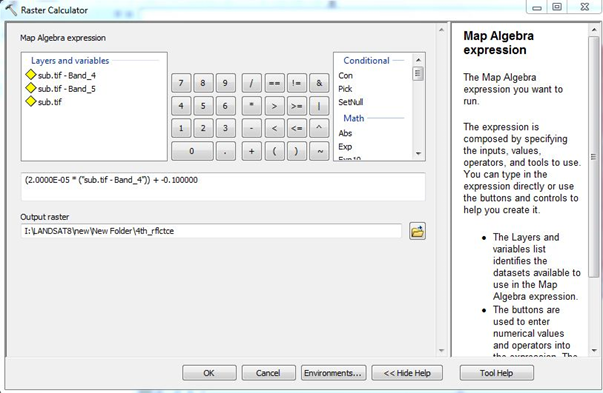 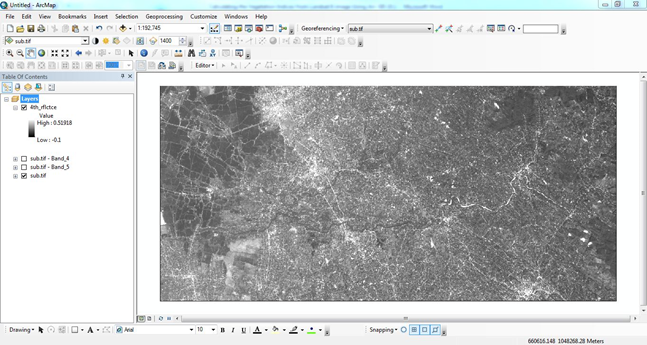 V. Calculate the Reflectance of band 5th by using the same method. 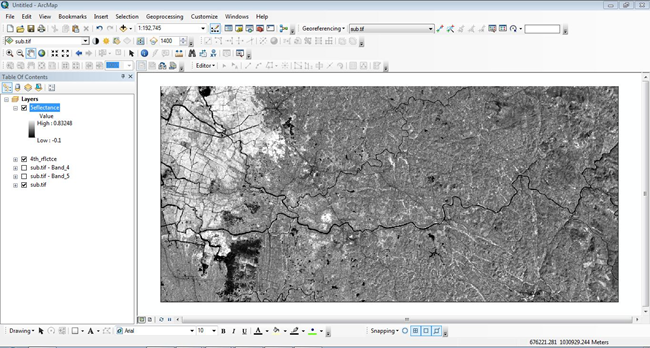 Reflectance with a correction for the sun angle is then:

I. Find Sun Elevation from the metadata 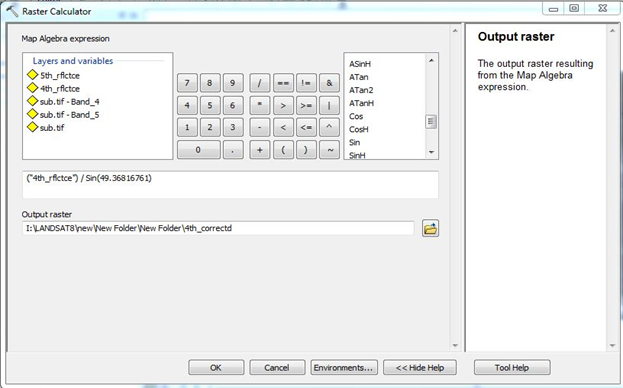 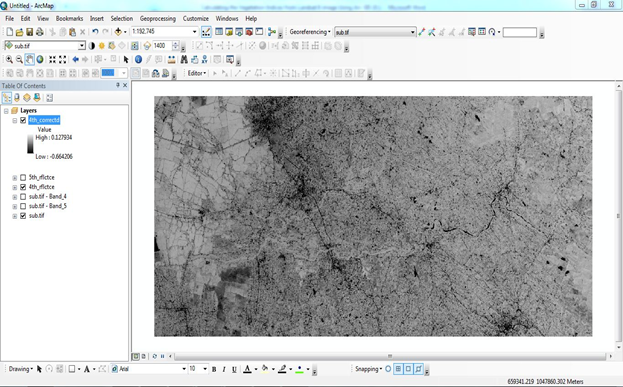 II. Calculate the Reflectance of band 5th by using the same method 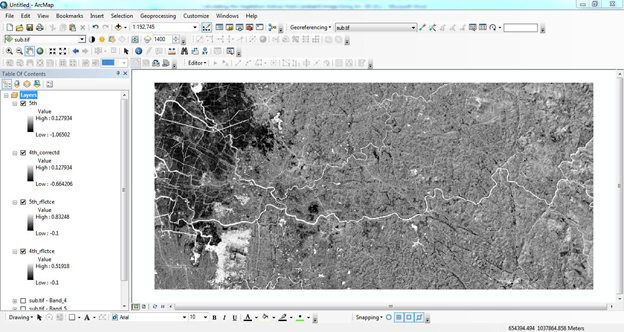 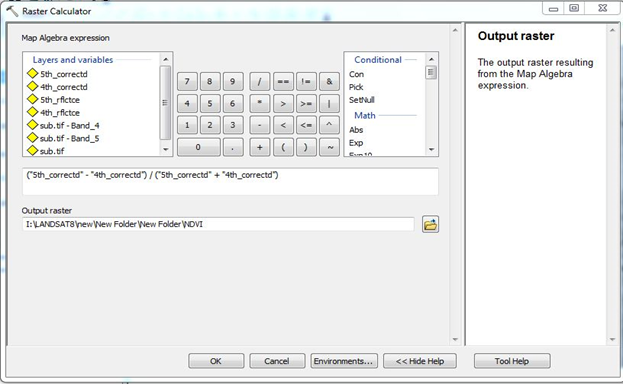 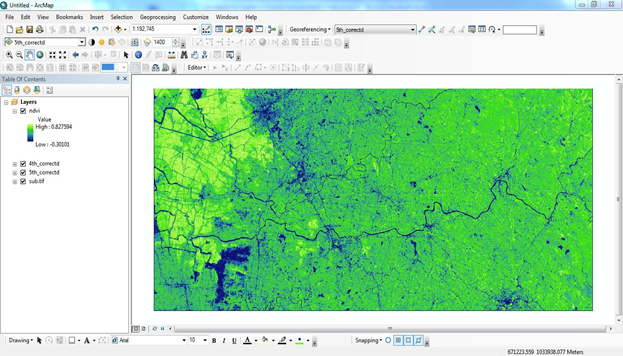 The value of NDVI is always between 1 and -1

Where NIR is the 5th band and RED is the 4th band respectively. L is the Soil brightness correction factor. The value of L varies by cover of green vegetation. High vegetation areas L= 0; the areas have no green vegetation then L=1. Generally L=0.5 in most causes and it works well. When L=0 then NDVI=SAVI 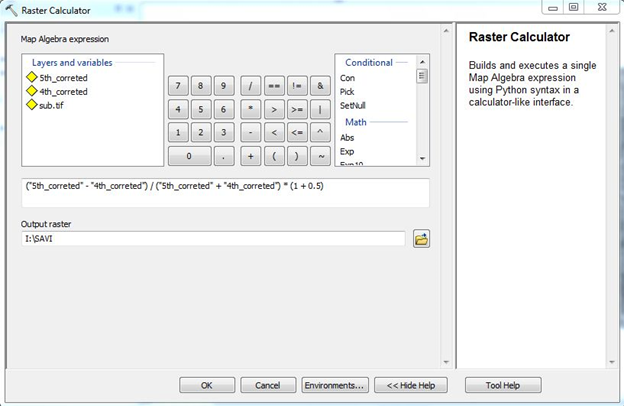 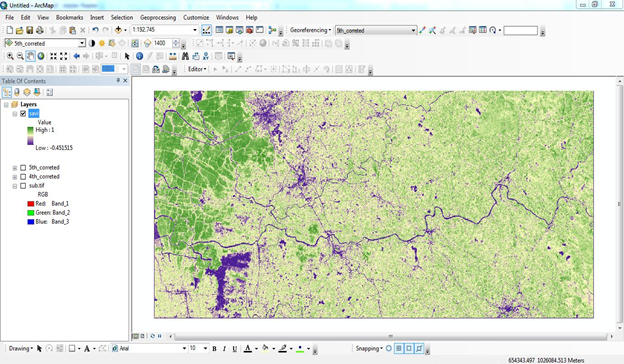 Where Tas_cap ἱ is the calculated tasseled cap index for brightness, greenness, or wetness from the coefficient given

II. Open Raster calculator and apply the formula for Brightness index and execute the program as follows 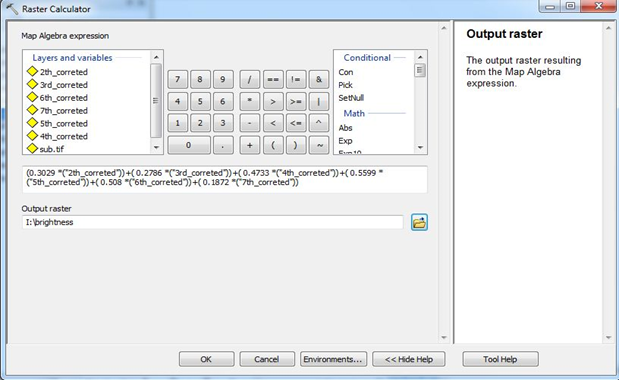 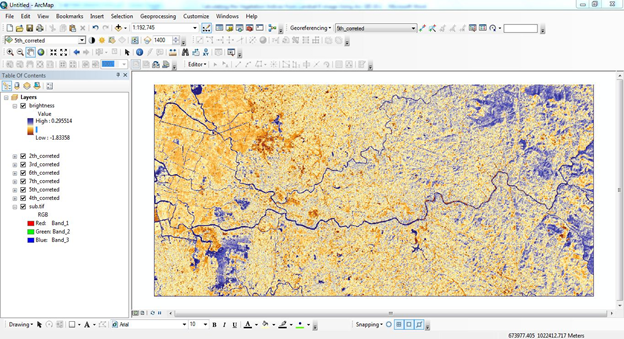 Step 7: Similarly calculate the other indices using the same method mentioned above 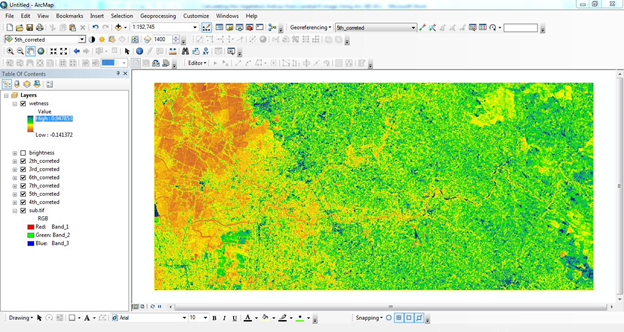 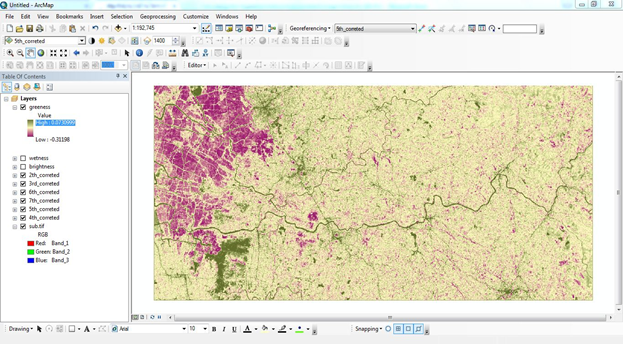