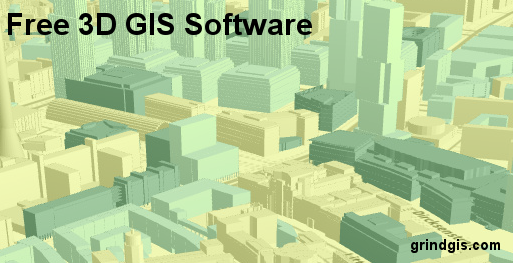 In GIS world 3D means that has X, Y and Z coordinates. Z coordinate is used to draw height. 3D map helps better understanding of the object, in GIS 3D map might be  TIN image, Digital Elevation Model or any GIS layer with elevation values. To plot these GIS layer with Z value or TIN image or DEM data you need a special kind of GIS software. So here are few 3D free GIS software that will help you create and visualize your 3D data.

QGIS (QGIS2Threejs): QGIS is an open source software and allows GIS user to create, edit and analyze GIS data. It is evolving every year, different plugins are added by user. QGIS2threejs plugins allows DEM or any other 3D data to plot . Following Tutorial show how to run the QGIS2Threejs plugins.

GRASS GIS: As you all know about GRASS GIS software which has 350 modules to render the map. It runs in QGIS by using plugins. Latest stable version of GRASS GIS is 7 which was released in 2015. GRASS gis includes NVIZ component which has the capability of displaying 3D or 4D images. It also support the voxel. Tutorial

Blender: Blender is another opens source 3D graphics software which is used for creating animation movies, visual effects, art, 3D prints and many more. Some of the 3D GIS processing can be achieved using Blender such as building Terrain model, 3D airphoto and more. You can also create shaded relief map on Blender, here is step by step tutorial. QGIS can be used heavily to create a terrain model, here is a video tutorial using QGIS and Blender to create Terrain model. There are numbers of GIS add ons for blender, Addons collection.

SAGA Software: System for Automated Geoscientific Analyses (SAGA GIS) is a GIS software used heavily for editing spatial data, it was primarily created by the Department of Physical Geography, University of Göttingen, Germany but now volunteer from all over the world are member for it’s development. You can create and visualize 3D data on SAGA GIS, here is the step by step tutorial.

MICRODEM: MicroDEM is free open source mapping program especially for the 3D data, it was developed by the Professor Peter Guth. Software can work with DEM, satellite imagery, scanned image, vector or raster data. There is an online document about the software and how to run it, Tutorial.