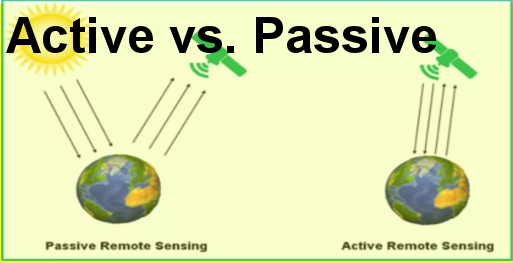 There are two main types of sensors used in remote sensing technology, active sensors and passive sensors. Difference between these two is quite small, however, leaves great impact on their functionality. As we learnt in primary school, sun constantly emits light energy and is only source of natural light for earth. Moreover, this energy is not observed by any component in solar system. Instead it is reflected to somewhere else. Just like the moon, it shines despite of not possessing its own light source. 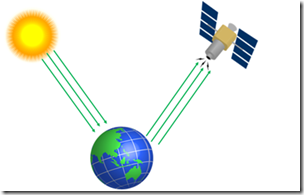 Constituents of earth’s surface and its atmosphere produce natural emissions. Measuring these emissions is useful for global satellite purposes. For measuring these emissions, passive sensors are engineered using multiple microwave components and instruments. Passive sensors measure this energy or power as a function of surface combination of physical temperature, roughness and other physical characteristics related to earth. Fixed physical properties of substance being measured [earth in this case] are used to find measurement frequency bands for passive sensors. These fixed properties are also referred as molecular resonance. It is noticeable that frequency does never change and associate value cannot be duplicated with other frequencies present in the band.

Radio astronomy instruments are used to pattern the outputs acquired from passive sensors. These radio instruments are used for detecting and measuring very low power frequencies. These low frequencies are quite sensitive to accumulating radiation. Especially that comes from a radiation generating through a multitude of emitters located on the ground. In such criteria, both in band and out band frequencies are involved on which measurements are being made. 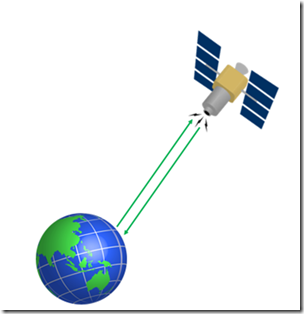 Active sensor is more of a radar instrument not a microwave one. Objective of this device or sensor is also for measuring signals. However, they do not come from the sun like this. They throw their own energy source towards earth. This energy reflects from the earth’s surface. These reflections are detected and measured by active sensors. Both earth’s physical surface and atmosphere reflects such energy exposed by active sensors. These space borne active sensor satellites are involved in a variety of remote sensing operations and observation of earth’s physical body and its atmosphere as well. For instance, rainfall rate over earth’s surface can be measured by observing radar echo over rainfall. Precipitation radars are capable of carrying out this operation.

Moreover, technology is evolved to the point of cloud monitoring radars. These cloud monitoring radars are capable of reflect echo over cloud and measure that reflection. Such reflection allows creating a three dimensional body of the cloud. It is useful in weather forecasting and disaster management. These active sensors operate in criteria of space research services or earth exploration satellite service. These satellites constantly share their data with other satellites to improve overall performance of various satellite services.

Difference Between Active and Passive Sensors: 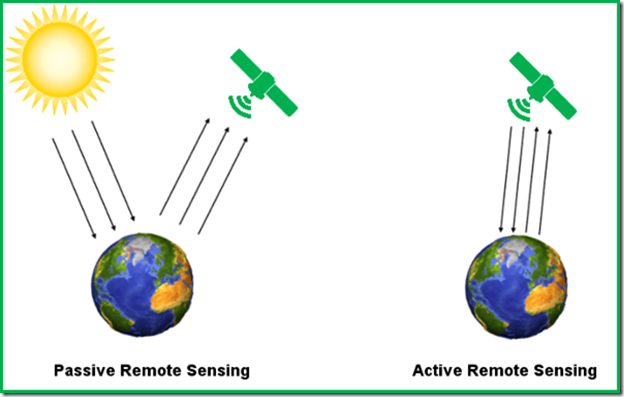 Vegetation: Radar signals interacts with the vegetation in a very complex ways and penetration level of signal depends on it’s strength and water content of the vegetation. Return radar signal may include of trunks, stems and leaves aswell ground surface. This type detail information about the vegetation can only be captured using this type of sensor, SAR data are used all over the world nowadays for vegetation studies.

Water Bodies: Fresh water is important for human civilization and maintaining it is very important. Hydrologist seeks to understand the movement, distribution and quality of water on Earth. Active remote sensing like airborne or spaceborne can be used to measure the water in its various forms.

Surface Water: Understanding the temporal and spatial variations of water in rivers, lakes and wetlands is very important for the life of earth plant.Radar

technology is highly accurate for identifying the area of the surface water and the water levels accuracy range in centimeters using the interferometric technology.

Groundwater: Balance of groundwater and surface water is necessary for increasing demand for drinking water or for irrigation. Active remote sensing can be effect to penetrate the soil to measure the acuqufiers (<100M) and this is possible when surface soil is dry.

Snow: Measurements of snow-pack extent and snow water equivalent (SWE) are very critical for balancing water supply in many areas and also forecasting the river water flow, avalanche and other snow related disaster. Radar technology can be used to perform snow related analysis.

to water, active remote sensing is used to find out sea ice extent and age.

Based on the range of the electromagnetic spectrum, there are three types of active remote sensing.

Also Read: LIDAR Data 50 Applications and Uses- It is important

Active Microwave Remote Sensing: It operates in the microwave region and RADAR is the example of it. On this type, sensor emits microwave (radio) signal to the specific target.

Majority of active sensors operate in the microwave portion on the electromagnetic spectrum. This makes it possible to penetrate atmosphere in any circumstances.

Laser Altimeter: The instrument that is used to measure the height of the platform ( aircraft) from the surface.

LIDAR: A light Detection and Ranging which uses laser beam to hit the target and  receive the backscattered or reflected light.

RADAR: RADAR is a type of active remote sensing which generates it’s own electromagnetic wave that transmits in the form of radio signal to measure range angle or velocity of the objects.

Ranging Instrument: A device that is used to measure the distance between the target object and the instrument.

Scatterometer: A high-frequency microwave radar which is used to measure the backscattered light or radiation.

Sounder: A instrument that is used to measure the vertical distribution of precipitation and temperature, humidity.

Since natural light is not required them for functioning, they are capable of capturing satellite imagery regardless to time, let it be day or night. Cloud and weather conditions do not affect the imagery quality at all. For dealing with clouds, microwave technology is used in these active sensors.

In most of the active sensor satellites, radars are quire noisy and sometimes overbearing too. For an inexperienced user, satellite imagery is quite similar to a bunch of USELESS images full of scattered pixels. The pictures aren’t pretty at all. However, it does not matter since such satellites are commonly used for flood observations which do not require image quality much.

Some of the most common examples of Active sensor satellites are RADARSAT-1 and RADARSAT-2 by Canadian space agency [CSA], Airbus defense and space Terra-SAR-X RADAR Satellite and LIDAR [Light Detection and Ranging].

LANDSAT mission is the longest running mission till the date, earth is observed with the help of it. Tons of information and documentation about changing earth is collected thanks to LANDSAT mission. This mission has been running since 40 years now. Knowing this, one can understand that remote sensing must be throwing some benefits for entire globe. And definitely, that is true. Following is a list of most common applications of passive remote sensing technology:

Satellite data is constantly being integrated in many modern technical fields and industries such as oil, gas, land management, energy, defense and military, agriculture, coastal applications, etc. This is just a glance. To get in more detail, there are hundreds and thousands of applications of satellite remote sensing technologies covering most of the modern technical fields.

How Reflected Sunlight is Detected by Passive Sensors:

Electromagnetic radiation is constantly generated by sun and is exposed into the solar system. This process will remain constant as long as sun exit. Since earth is also a part of solar system, this radiation strikes here too. This electromagnetic radiation is also sometimes referred as incident energy. Incident energy interacts in three different ways with earth surface . These three different interactions are as follows:

Specific wavelength or certain frequencies are used by passive sensors for measuring this reflecting natural energy. Not all of this energy is reflected in the same form. That is why passive sensors are designed or engineered in a way so that they can measure it in different forms. For instance, they can track visible energy [390-700 nm], infrared energy [750-1 nm], ultraviolet energy [100-400 nm] and even more types of such EM radiation. Various forms of reflected incident energies with different wavelength ranges are also referred as bands. Sensors possess multispectral imaging technologies that are multiple bands; about 3 to 10 each. These bands can also be in hundreds of number. Such huge collection is also referred as hyperspectral imaging technology.