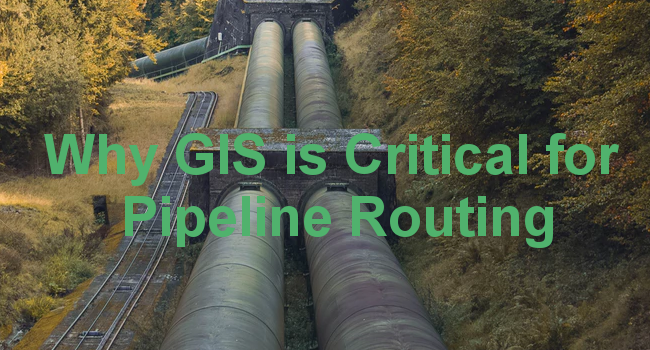 Geographic Information Systems (GIS) are becoming critical components of the pipeline routing process. For the oil and gas industry, GIS is used to store, analyze, and manage geographic data pertaining to an oil and gas project. By creating a complete GIS rendering and simulation of a geographic location, an oil and gas company can provide better, more accurate estimates regarding their current and future projects.

Here’s how GIS is revolutionizing pipeline routing, and how drone technology is being used to improve upon it.

The Importance of GIS for Pipeline Planning and Development

Oil and gas companies have a lot to consider when they plan new pipeline. Decades ago, most pipelines could be laid in a straight point-A to point-B course; there was very little standing in the way. Today, environmental concerns, preexisting infrastructure, and even other pipelines make it difficult to find a clear path. This has created a need for new technologies and new processes.

GIS can be used to easily identify potential roadblocks to pipeline planning, making it easier for pipeline developers to find a clear course that’s still as cost-effective and efficient as possible. Rather than having to potentially change course later in the project (which can be extremely costly), the developer will know exactly where the pipeline is going to be laid from the start.

GIS is used to:

Ultimately, pipeline routing with GIS is safer, cheaper, and faster than traditional methods. When pipeline routing is done without GIS, a significant amount of data must be compiled manually, and the entirety of the project may potentially be disrupted. Of course, that still leaves companies with a question: What is the most effective way of gathering GIS?

Aerial surveying makes it easy to collect accurate GIS data quickly. With the power of aerial surveying, GIS information can be collected in as little as an evening. This level of speed is incredibly important: Surveying must be done before the pipeline can be routed, and delays in pipeline development will likely be extremely costly.

Faster and safer than traditional ground surveys, aerial surveys collect large volumes of 3D topological information from above. When these aerial surveys are completed by drone, they have higher resolution and greater accuracy; drones can fly low to the ground, getting more 3D information, and thus making the project less likely to experience issues in the future.

Aerial surveys conducted via drone can be almost immediately deployed, depending on the weather, and multiple drones can be used to collect information from larger swathes of territory at once. Drones are more cost-effective than plane or helicopter surveys, because they don’t require a manned crew or specific licensing and permits. Drones are also faster than ground surveys.

A combination of GIS and aerial surveys will be able to provide improved visibility across any potential project site, saving a company money and improving upon the project’s ultimate outcomes.

Once GIS data has been collected with aerial surveys, it can then be used in advanced simulations and 3D modeling suites. Not only can this GIS data be used to route pipelines more effectively, but it can also be used to simulate potential environmental issues, disasters, and other scenarios. GIS data can be used to create comprehensive environmental impact reports and advanced 3D presentations. All this information can be presented to everyone from investors to environmental surveyors.

The oil and gas industry is increasingly leveraging advanced technologies for better results. GIS (and UAV technology) can reduce the costs of pipeline projects as well as the potential risks. By making the project faster, safer, and more effective, GIS can also make it more profitable, protecting the oil and gas company’s bottom line, both during construction and after the project has been completed.