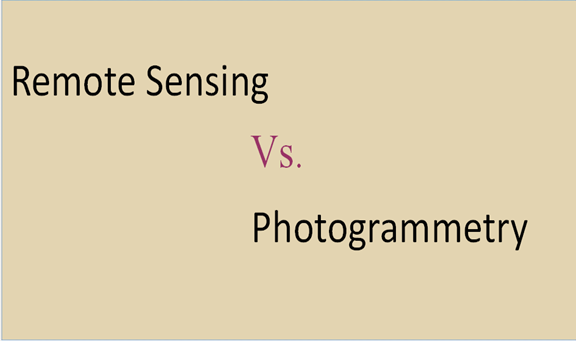 Remote Sensing is a technology that identifies and measures different parameters without direct contact by relying on inspecting different wavelengths of light radiation. Remote Sensing identifies and processes even the tiny differences across an extensive array of wavelengths and spatial orientations. The differences are then used by Professionals in identifying objects and later categorizing them in accordance to their type, material, or location. They can also use them to measure slopes and distances.

On the other hand, Photogrammetry uses imaging rather than collecting light wavelength data. It determines the spatial properties and object dimensions of photographic pictures captured. Photogrammetry relies on aerial triangulation as a technique to measure changes in position. This method involves taking aerial photographs from more than one location and using measurements from both places to pinpoint locations and distances more accurately. The several photographs give various lines of sight or rays from the camera to specific points. The trigonometric intersection of these lines of sight can then produce accurate 3D coordinates for those points.

Remote Sensing has been used in meteorological operations for imagery. It first came into operation because of the high number of color bands in satellite imagery. The technique utilized those color bands to collect 2D information for weather tracking and geographic information system (GIS) mapping, for instance. Today, Many satellites still use remote Sensing to collect a range of information from the Earth in weather and land cover evaluation and to generate maps. It is also useful for generating information and data on terrestrial projects, like surveying or earthworks construction. Remote Sensing incorporates any observance and measurement techniques that don’t rely on direct contact with the object or landform in question.

Remote Sensing also has two types; Active and passive remote Sensing. Active sensors emit energy to scan objects and areas, whereupon a sensor then detects and measures the radiation that is reflected or backscattered from the target. RADAR and LiDAR are examples of active remote Sensing where the time delay between emission and return is measured, establishing the location, speed, and direction of an object while passive sensors gather radiation that is emitted or reflected by the object or surrounding areas. Reflected sunlight is the most common source of radiation measured by passive sensors. Examples of passive remote sensors include film photography, infrared, charge-coupled devices, and radiometers.

Some of the applications of Remote Sensing include;

Some of the Photogrammetry applications include;

Differences between remote sensing and GIS