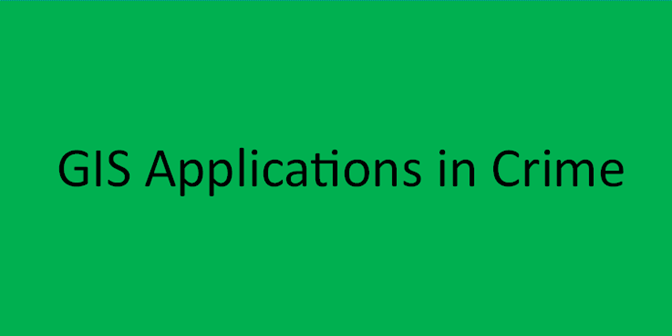 Crime activities are very saddening for most people. Most citizens usually depend on government support to ensure security for them. Due to this expectation, the government must do all that it can to help protect its citizens from crime. Many governments have therefore adopted digital systems for crime control, prevention, and investigation. GIS is one of the information systems implemented to help curb crime. Some of the applications of GIS in crime include the following:

1. Crime identification: GIS offers a broad platform for determining location coordinates. In most cases, crime takes place in interior areas. One can send an alarm when involved in a crime situation. The signals generated by the device and can be tracked using GIS as well as its location coordinates located. Most intelligence services in various countries have a GIS to monitor crime occurrences. With this Police and intelligence agencies can then get to rescue fellow citizens who might be in critical conditions of crime

2. Crime awareness:
GIS is used to generate maps and digital content on areas that are worst affected by crime. The information generated is issued to media houses for press releases and this creates awareness. Were it not for GIS such a process would take longest to complete. Erroneous reports and information that would mislead the public can also prevail due to the manual way of doing crime analysis and this might hinder the fight against crime in our societies.

3. Evacuation:
Some criminals like terrorists are usually very merciless. Such terrorists might be demanding a very large amount of ransom. Because most governments do not negotiate with terrorists and criminals, one of the only ways might be an evacuation. These evacuations require government agencies in the security sector to have ample information about the location of terrorists and hostages before making their plans. GIS would thus be of help as satellite visualization and images can contribute to a successful hostage evacuation. Drones that are integrated with GIS are also applicable. For plane hijacking incidence, a real type tracking system that uses GIS to determine the location of aircraft might be good for planning on helping passengers

4. Crime mapping:
crime mapping enables both specialists and non-experts to picture and analyze crime hotspots. This can be done on a map or a suitable graphical representation object. To map crime activities with relation to demographic features, complex statistical methods are executed on data sets relating to crime and one that arose from different locations. This is also very helpful in detailed crime analyses.

5. Crime investigation:
Police and undercover agencies own GIS for crime investigation. Crime tracking is thus easily achieved with the help of small computer devices that make use of GPS and GPRS and the geographic information system. All possible routes that could have been taken by crime suspects are undoubtedly spotted and the suspects found in their hiding places. A GIS can be linked to satellites that capture live images to track moving suspects who might be escaping from crime scenes. Total coordination between police systems and GIS are therefore of many advantages.

6. Storage of crime interview data: GIS enable data collected from different crime victims by the different government`s security officers to be stored securely in remote databases and be backed up for sampling and analysis. In cases where second party security agencies are involved, data involving security can be shared with permission and responsibly to any intelligence station for further investigation. This pervasiveness of Data entry and access is enabled by cloud-based GIS platforms.

7. Crime pattern analysis: For most places, it has been found that a given pattern of crime incidents is identified. Some places also exhibit certain times of high crime than others. In other places also, geographic features around those areas are also seen to favor criminal activities. Analysis and mapping of these patterns can be comfortable to see the relationship between crime, weather, and geographic features. The ability to unmask these crime patterns is very helpful as it can be used by security agencies to mitigate crime accordingly.

8. Crime prediction:
After pattern analysis is done, crime prediction can now be simple to realize. Past trends are a foundation of what might in the future. GIS can be feed with data involving crime at various geographical locations. This data undergoes processing and probabilistic statistics to try to unmask where the next crime incidence is to take place. The processes involved when GIS is used are accurate and fast. Having information on where crime is to occur helps the governments have more security on the ground to prevent the crime. This sounds an effective way to control and minimize crime.

Tags: 8 GIS uses in Crime, How GIS is used in Crime analysis?

Applications of GIS in Tourism