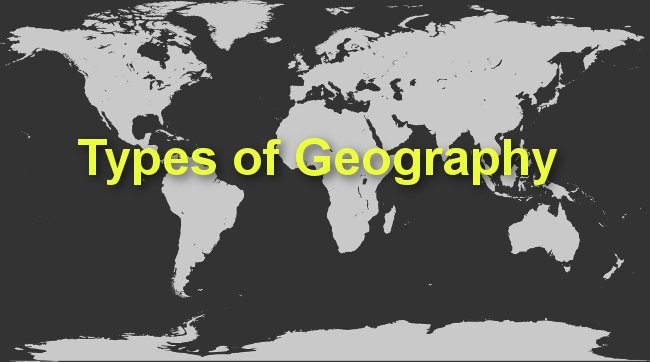 Geography is defined as the scientific study of earth’s lands, its features, its inhabitants and the phenomena surrounding the earth. It is an all-round discipline that explains an understanding of the earth and its human, physical and environmental complexities. Geography can be divided into three main branches or types. These are human geography, physical geography and environmental geography.

Medical Geography: This is the branch of geography that deals with the study of patterns and spread of diseases. This involves epidemics and pandemics and their origins and distribution over a given geographical location.

Religious geography: This is the branch of human geography that studies the spread and distribution of religious groups, their culture and the built environment.

Political geography: This branch of human geography studies and investigates the political aspects of humans. This involves the boundaries of countries, the development strategies put in place and the voting patterns and behaviors within each jurisdiction.

Biogeography: This is the study of animals and plants and their distribution and patterns on the earth’s surface.

Geomorphology: This is a branch of physical geography that deals with the study of land and the processes that different land formations go through. It also studies the various land forms and the subsequent disappearance of these forms through such factors as erosion.

Soil geography: This involves the study of the upper layer of the earth’s surface, the lithosphere and its categorization and distribution.

Environmental geography is the study of spatial aspects of interactions between humans and their immediate environment and the resultant repercussions of this interaction. This branch of geography helps in understanding the various types of human activities over an area and their resultant effect on this area.

11 Applications of GIS in Geography

Advantages and Disadvantages of Cartography