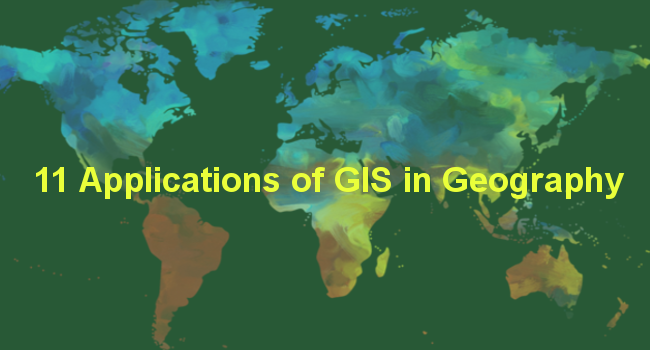 GIS continues to be used in various fields to analyze important data that can be used to make informed decisions. GIS has found important usage in various fields and one such field is in the field of geography. Below are some of the applications of the system in Geography.

1. Mars Terrain – Going for a spin on the rugged terrain of Mars using data captured by the Mars Orbiter Laser Altimeter (MOLA) instrument on the Mars Global Surveyor (MGS).GIS continues to play an important role in mapping out the terrain of the planet to help scientists understand the nature of the terrain.

3. Middle Eastern Geodatabase for Antiquities – Recording, monitoring, and protecting archaeological sites to avoid impacting, factor cost for site mitigation – developed by the Getty Conservation Institute (GCI) and the World Monuments Fund (WMF). GIS is used by scientists to monitor and preserve the archeological sites to avoid interference and tampering with the data

4. Mediterranean Landscape Dynamics – Modeling surface process change and landscape evolution to better understand the long-term interactions of humans and landscapes in the Mediterranean using GRASS GIS. GRASS GIS is software that is used to model the surface changes and the processes that they go through in order to achieve the changes.

5. Stone Tools – Characterizing geographic features suitable for making stone tools and clay pottery such as lithic materials, water resources, stream hydrology with geologic controls like bedrock outcrops and drainage basin floodplains. This is especially in relation to the stone-age culture where most of the tools were primarily made of stones.

6. Wildlife Tracking – Logging the species richness of marine mammals like whales, seals, walruses and narwhals and seabirds or waterfowl in the Arctic. GIS data can be used to track the wildlife of a particular area and to determine the migration patterns and numbers associated with each species.

7. Search and Rescue – Lunging into search and rescue operations using the Safety and Operability Index which calculates risk based on factors such as sea ice, visibility, temperature, and distance from SAR resources. Search and rescue mission is especially important because it plays an important role in saving lives and this informs the importance of the data used during the process.

8. Climate Classification – Modeling observed and projected climate change scenarios with variables such as population growth, economic development and varying energy use and technological innovations. The GIS technology plays an important role in determining the patterns of climatic conditions of a given area and how these patterns will inform mass movement of people and other species now or in the future.

9. Earthquake-Landslide Susceptibility – Mapping the susceptibility of earthquake induced landslides using an artificial neural networks and factors such as slope, aspect, curvature and distance from drainage. By analyzing the terrain of a given area and the resultant tectonic forces, scientists are able to predict the possibility of scenarios such as landslides and the subsequent effects on the environment. This also plays an important role in saving lives in the process.

10. Earth Trends Modeler – Assessing long term climate trends, measuring seasonal trends in phenology, and decomposing image time series to seek recurrent patterns in space and time in IDRISI TerraSet. Scientists have also managed to leverage on the GIS data to determine long term and short term climatic changes and the possible trends that the climatic conditions follow over a long period of time.

11. Water Yields and Scarcity – Estimating water yields and scarcity at a sub-watershed level to calculate hydroelectric potential to the year 2100. Water Scarcity with Ecosystem Services Modeler (IDRISI). Through GIS, scientists have been able to monitor the possibility of water scarcity within a particular location and the effect the scarcity would have on the ecosystem.

Advantages and Disadvantages of Cartography