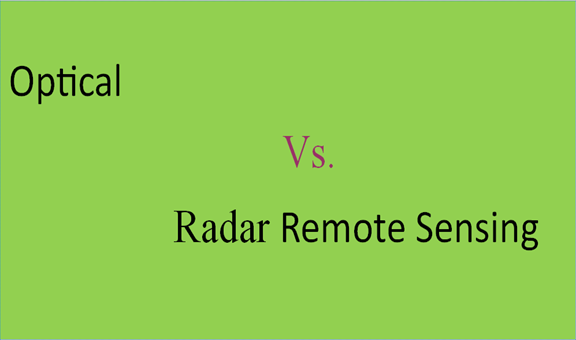 Observing Earth from space helps in monitoring land-surface dynamics and probing geological features. It can be done through optical or radar remote sensing.

Optical is the most common satellite sensor. Optical sensors gather light within the wavelength range human eyes can perceive and light in the nearby infrared. Optical sensing can be considered passive. The satellite sensors examine the surface of the Earth across a varied spectrum of electromagnetic radiation frequency.

On the other hand, radar remote sensing can be considered active. The sensors emit microwaves towards the Earth to record how they are reflected at the receiver orbiting around the planet. These sensors offer expansive capabilities when it comes to the type of observation.

Using Optical satellites is a great way to view the world as the human eye does. The optical sensors measure reflected solar light, thus only function during daytime and cannot penetrate the clouds.

On the other hand, radar sensors reveal the land cover not visible to the human eye. Radar sensors are sensitive to the texture (roughness and wetness) of a target surface; hence they can capture all details in almost all weather conditions. Such details include; marine pollution, soil moisture, forest biomass, and vegetation cover crop type.

Optical sensors mainly look straight down and measure the angle perpendicular to the line of light.

While Radar sensors are side-looking, they also portray angles to an object differently because they measure the range.

Optical sensors rely upon the sun’s illumination or thermal radiation to create the brightness that is observed by the sensors. Therefore, the sensor image depends upon the varying sun angle during different times of the day.

In contrast, a remote radar sensor carries its illumination source in radio waves transmitted by an antenna. Therefore, it can be used with equal effectiveness at any time of the day or night.

The most significant disadvantage of optical sensors is that they are adversely affected by weather conditions. There is a disadvantage when it comes to seeing through clouds and vegetation. Therefore, optical sensors may only capture good quality images if the weather and the sun permits.

While the most significant advantage of radar sensors is that it is not affected by weather conditions and can see through clouds and vegetation, radar sensors may also be used over the area of interest when it is dark or thick cloud cover.

5. Scope of carrying out observation

Optical satellites make it possible to examine a given area of interest in detail. When taking scans of vast areas using optical sensors, it may take up a few more days than remote radar satellites.

Radar sensors, meanwhile, are well suited to regularly scan complex, vast areas and detect the potential changes that may be taking place there. It does this over short periods and in a continuous manner.

6. Differences in the wavelengths or frequencies

Optical sensors use wavelengths near that of visible light that can be equated to 1 micron. Therefore, objects captured using optical sensors may appear smoother.

Remote radar sensors, on the other hand, use a wavelength of 1cm to 1m. Such an advantage over the optical sensors is what makes them suitable in cloudy and stormy weather conditions.

Advantages and Disadvantages of Remote Sensing