Are you torn between choosing ArcGIS and AutoCAD Map? This guide will give you a comprehensive analysis of CAD vs GIS so you can determine the most appropriate system for you.

GIS means Geographic Information System which is a system that facilitates interoperability between mobile and desktop applications, server components, developer tools, and users in the collection, analysis, storage, sharing, and representation of spatial data in digital media. The platform may be deployed in the cloud – Azure and Amazon – or on-premise with the help of ArcGIS Enterprise or ArcGIS Online. Basically, the system has numerous components that communicate through common file formats and the ArcGIS REST API. It is important for users to understand the components of the system so they can create successful applications.

On the other side, CAD or Computer Aided Design uses a system of software and hardware to create objects. CAD technology can automate almost all methods used in organizing, drafting, and automating map data. It emphasizes on interactive graphics and their functions.

The two applications are deployed in industries where information about an area is required.

Why integrate CAD and GIS?

Apparently, major investments have been made on both database systems. While most people use the GIS mechanism, there is a need to create interfaces between CAD and GIS. The AutoCAD Map 3D is a perfect example if an integrated system where the components of computer-aided design technology work with the GIS database. The structure of the CAD system is interoperable with GIS files e.g. SHP. Raster/GIS data from satellite imagery such as DEM files are used in the creation of realistic terrain for CAD designs. The Esri’s AutoCAD plug-in allows AutoCAD users to directly access GIS files without necessarily leaving the CAD system.

As you can see, the CAD and GIS integration increases the interoperability between the software. Suppose you want to create a crane that is located in an unstable terrain that might interfere with the GIS information. That information should be sent and represented effortlessly by the user. Thanks to the Semantic Web interoperability, it is possible to increase interoperability through WOL – Web Ontology Language or RDL – Resource Definition Language. This is accomplished with tasks that are subdivided into sub-tasks. These tasks are then mapped to CAD and GIS operations. The workflow allows the software to detect each other’s services, making operations look more seamless. In case of such issues as data formatting, format tools like FME facilitates the auto-conversion and preservation of the required data while eliminating unnecessary information. That way, objects in one platform can be utilized easily on the other platform without editing manually. These are some of the tools that have been facilitating easier operations between CAD and GIS over the last few years. They bridge the gap that has existed for long between CAD and GIS. 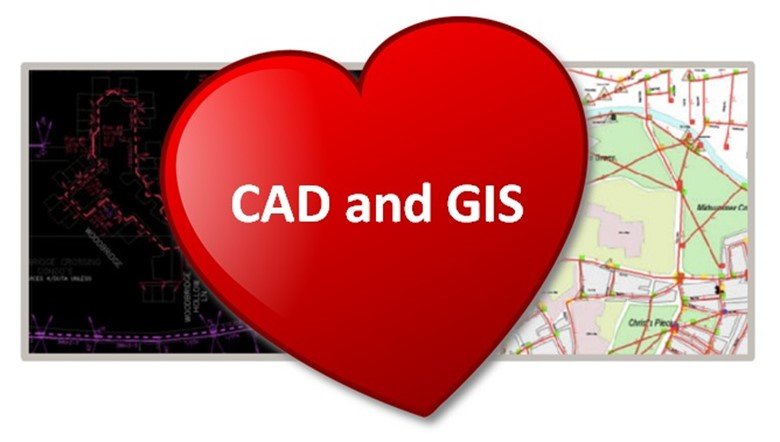 The greatest difference between GIS and CAD is how data is collected and utilized. The CAD technology designs elements that will be produced while GIS represent information of an area as it appears.

The tools used in the two systems vary significantly. To create dimensions and layers of buildings and objects, CAD requires text, circles, and lines. Designers and architects can, therefore, create any diagram of the structure they want to produce. The scale is not a problem in this case since the real measurements are added during the last stage to give the designer a clear idea of the necessary supplies. When it comes to GIS, spatial data is used in conjunction with rasters and vectors to create maps that show roads, states, and towns. It is mostly applied to relate the distance between objects. The information obtained through GIS is represented in a visual format, making it easier to create maps. The data is manipulated and interpreted better that when graphs or charts are used in a spreadsheet.

Mostly, one application is enough since most people need to create either objects or maps. But there are a few instances when both applications are necessary for example when a big facility requires expansion. In such a situation CAD may be used to develop a building plan while GIS would come in handy to establish ground maps. With real-life geographical data, a developer can determine the amount of space that is available for a project.

Both CAD and GIS help in the development of the management system of any facility since the mapping aspect determines the square footage of an area and how it can be used. The CAD features represent how new structures can affect the existing ones. Since the two applications use layers to design models, the CAD database may be linked to GIS to give the best of both worlds. However, the user needs to customize the software so it can match their specific needs.

The CAD developers are gradually adding more features meaning that the differences between the two applications will start to diminish. That’s why it is imperative to stay updated with the latest technologies by outsourcing services from top drafting firms in the industry. Experts can help your organization avoid the expenses related to new in-house software. 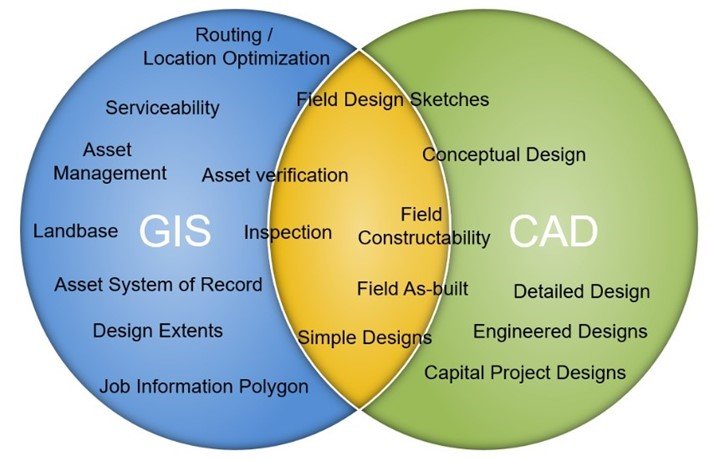 Benefits of CAD over GIS in mapmaking

Architects and surveyors regularly use both GIS and CAD to create maps. The main advantage of using CAD to draw a site, map, or profile is a high level of accuracy. CAD packages facilitate drawing with coordinates or distance in a variety of units. CAD drawing can be used to calibrate the data needed for construction by civil engineers e.g. the quantity of material. They also ensure that the models meet the design standards. Precise CAD models can easily be integrated into drawings. To create a map, for instance, the best option is to use a CAD. GIS may not provide accurate drawing as required by engineers. Creating a line of work in GIS is time-consuming and awkward.

Benefits of GIS over CAD

GIS outweighs CAD in that it allows users to attach data to the lines, polygons, and lines in a map. This makes GIS the best method for visualizing and analyzing information through maps. For instance, engineers use GIS to produce a map that shows all the roads labeled according to the condition rating of the pavement. This would take decades to accomplish using CAD because the CAD drawing lacks data. However, handling such information makes GIS seem a bit slower. So, the best solution is to combine both worlds. That is why the AutoCAD Map is highly recommended. Whether you want to combine the two systems depends on your needs. If you are going to plan the design of your house, you may use a CAD. But to design a base map of a city, GIS would be more appropriate. Before you make a final decision always keep in mind that a CAD is for objects while GIS is for maps.

A summary of the differences between GIS and CAD

The differences can be wrapped up as follows:

What are the best GIS apps?

QGIS consumes just any type of data. It is versatile and cutting-edge when it comes to the consumption of data. To write and read GIS formats, QGIS uses GDAL library and more than 70 vector formats can be supported. The app was designed to work in conjunction with PostGIS and has the largest community of users. There are numerous tutorials on the platform with sample data that provide hands-on experience. Rather than pounding pavements to load NetCDF files, the QGIS consumes it. And for24 hours a day, its interface allows you to roll it so you don’t need to waste time adding space-delimited files.

The ArcGIS extension is specialty software that brings out the real beauty in map making. This Add Data button is so powerful and it simplifies everything since it understands all GIS formats. It helps a lot when you want to add a raster or spreadsheet. All you need to do is hit the Add Data option.

These applications facilitate easy management of vector, raster, and GIS data. They provide a basic preview of the functions but focus mainly on the access and organization of data. The available search and filter options act as search engines. Besides managing data, they also create metadata. Metadata has evolved over the years into various formats like INSPIRE, NAP, FGDC, and ISO. With a QGIS browser, you can navigate a system of files and manage geographical information with ease. Both QGIS and ArcGIS handle CRS in a user-friendly manner.

5 ArcGIS Tips helps you to perform you daily job