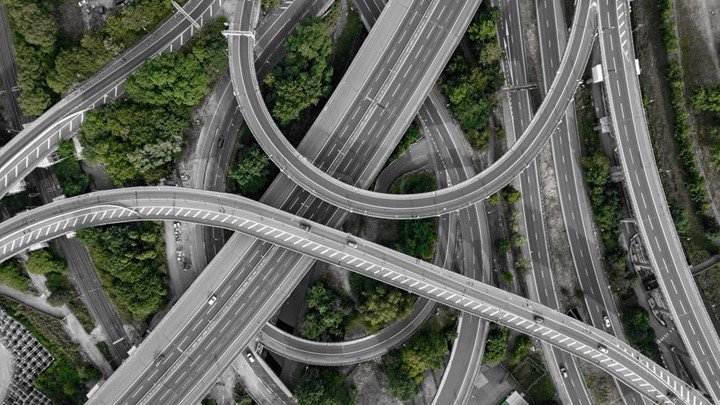 The transport sector is one of the backbones of a country’s economy. It’s through transport systems that goods and people can move as they go about their social and economic activities. Automation of most tasks has been witnessed not only in industries but also in transport. Geographic information systems is a computer system used in highway maintenance, accident analysis, route planning, environmental assessment, and transport safety as well as construction management. The following are thus the description of some of the applications of GIS in transportation.

1. Highway maintenance:
Highway maintenance has over the last few years become easy and cost-effective due to the introduction of geographic information System. Satellites can take images about highways on a real-time basis, which shows the critical areas that are experiencing challenges. Various maps are also availed by GIS digitally to the government and relevant authorities for decision making. Information about highway structures can be feed into GIS databases and accessed from any place.

2. Accident Analysis:
CCTV in most cities and towns, as well as satellites imaging services, is easy to integrate with GIS. Location addressing is used to raise the alarm to accident emergency responders to offer help. GIS can act as a source of a report in the event of an accident.

3. Traffic Modeling:
Most cities in the world are full of vehicles. Failure by the government to effectively manage traffic leads to heavy congestion and traffic jams, which are difficult to keep up with. Following the significant changes being made in the world of computer technology, most countries are migrating to the use of computer systems for traffic management and structure design. GIS has offered great solutions on traffic management for the different vast road networks available in cities and towns. This has proved to ease congestion by as only the best designs of road, rail and air are constructed. GIS does not only monitor these transport systems during construction but also offers surveillance and visualization of traffic after they are built.

4. Route planning:
When a proposal is made to construct new roads or railway lines, field experts must approve the routes on which the developments are to be laid out. Longer routes are to add more resource consuming and make travel time to increase, for example with roads and railways drastically. Road and rail engineers must navigate road or rail routes via the shortest and most efficient paths. Longer routes deprive the citizen or user of the road money as much of the expenses go on fuel costs. Efficient, secure, and shorter paths must, therefore, be realized. Its, however difficult to determine the best route if manual methods are used. GIS is best to apply in such instances as drainage, soil properties, and the sloppiness of land is easy to determine. This is thus one of the commonly performed tasks by GIS on infrastructure. It`s also easier to come with route designs and models when using GIS.

5. Environmental Impact Assessment:
Roads, railways, ports, and airports are usually built on the land. The existence of some structures that are put along with transportation amenities may have consequences on human life or that of wildlife. A good example is the construction of a highway or railway across a game park or very near to a water body. The environment is thus a factor that must be considered as it offers the habitat for both human beings and other living organisms. GIS comes to offer help as predictions on what would happen if a given infrastructure is started in a specific location are expounded. Pipelines are sometimes viewed as a mode of transport for petroleum products. Leakages from pipelines cause the death of aquatic animals. Transportation of petroleum and its products through pipelines is thus also another task undertaken with proper integration of GIS as the environment would suffer the most in case some things went wrong.

6. Construction management:
During the construction of airports, structure simulations must be performed using GIS related software before actual construction. Three dimension pictures are part of the design and modeling process. During construction, drone technology can be integrated with GIS to help in visualizing ongoing construction. Errors can then be corrected, and a wide of land properties feed into GIS for further planning. GIS is also used to enable the creation of design templates that explain a prospective project like a highway, airport, or port.

7. Transport safety management:
Information from different transport structures is beneficial to help formulate regulations and inform the public on how to use certain transport facilities. Crossing points can have integration with GIS for better signaling of drivers and people trying to crossroads or even railway crossing points. Places considered to be black spots and prone to accidents are also studied using GIS to determine the causes of accidents. This is thus very beneficial to any country.

Applications of GIS in Tourism

7 Ways to Use GIS for Students