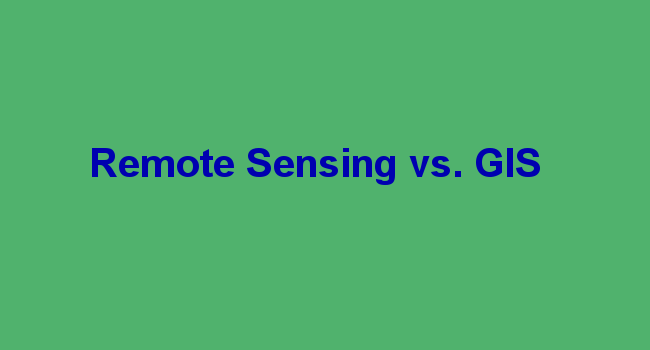 A geographic information system (GIS) is a computer-based tool for mapping and analyzing features and events on earth. GIS technology integrates common database operations, such as query and statistical analysis, with maps. On the other hand, remote sensing is the science of collecting data regarding an object or a phenomenon without any physical contact with the object. Below are some of the differences between remote sensing and GIS.

1.    It is a surveying and data collection technique: Remote sensing is a technique used to survey and collect data regarding an object or a phenomenon without any physical contact with the object or the phenomenon being observed.

3.    It reduces manual field work dramatically: Remote sensing technology relies upon technical instruments to collect data over large areas which reduce the manual work that could otherwise have required a lot of people to do.

4.    It allows retrieval of data in regions difficult or impossible to access: Remote sensing can allow data to be retrieved in places where humans cannot access such as over volcanic mountains, the ocean depths and several other locations.

5.    It allows collection of more data in a short period of time: Remote sensing technology is used to collect large amounts of data over a large area in a relatively short period of time. The data collected can be used to analyze various aspects of the object or area being analyzed.

6.    Mostly use in data collection: Remote sensing technology is mostly used to collect data that can then be analyzed to give information regarding an object or a give phenomenon on the earth surface.

8.    It covers a limited study area at a time: Remote sensing technology can be used to collect data over a given area on the earth’s surface but the data collected would be limited to the specific area being studied.

9.    Less robust: Remote sensing technology is far less robust than a GIS system because of its limited ability to interpret the data and also more susceptible to damage.

2.    It can cope with larger amounts of data: A GIS system is designed to accept and analyze large amounts of data at any given time due to the large capacity of the software and an elaborate personnel system used to analyze the data.

3.    It can cover large study areas: A GIS system is designed to cover an elaborate area of study due to its increased capacity to analyze vast and complex information simultaneously.

4.    It can cope with unlimited and frequent data edits: A GIS system is a robust system that can be used to analyze huge amounts of data and can also allow for unlimited data edits and change without the risk of collapse.

5.    More robust and resistant to damage: A GIS system is designed to be more robust in terms of functionality and less likely to be damaged due to its compact design.

6.    Faster and more efficient: A GIS system is more efficient in terms of data processing due to the elaborate components in the system used to analyze the data.

7.    It requires less person, time and money: A GIS system is self-sufficient and can be used to analyze large datasets with much less time, money and resources. A single person can analyze huge amounts of data to produce more complex information.

8.    Mostly used for data analysis: A GIS system is mostly used to analyze complex data and interpret the huge datasets into more meaningful information that can guide decision making.

10 Importance of GIS in Geology

Advantages and Disadvantages of Remote Sensing