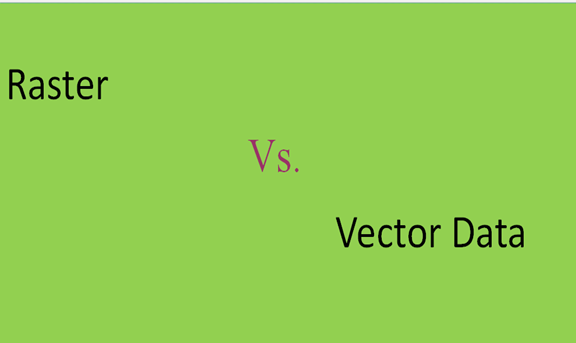 Scanned maps, images from satellites, digitalized aerial photographs, or digital pictures are classified as rasters. In the simplest term, Raster data consists of pixels, with each of them having an associated value that represents information like temperature and chemical concentrations. The pixels are well organized in a grid of columns and rows. Unlike the utilization of pixels in raster data, vector data vertices or sequential points are used for data representation. There is a y and x coordinate for each vertex. Vector data examples include rivers, linear features, administrative borders, and roads. In displaying longitude and latitude, vector data uses polygons and lines.

Referenced information, especially geographic, is managed, analyzed, and displayed using the GIS (Geographic Information System), a computer-based tool. Spatial data is a data structure or type available in GIS, and it can be maintained either as raster data or vector data. The relationship of geodata can be easily visualized and understood in the form of maps, charts, and reports, among others, by the utilization of GIS. Raster data is quite useful as it is applicable in a vast range of applications. The main categories under raster data include ratsters as basemaps, surface maps, thematic maps, and features attributes. Vector-based files are also commonly used, and sometimes users don’t realize it. For instance, font files are widely used, yet some do not realize they are vector graphics. The fonts remain clear even after the text size is increased, either it is to be viewed online or offline, for instance, in a word document. Raster data and vector data have differences, including the data to be represented and the mode of data representation. The differences include;

Raster and vector data differ in their definitions, even though they are both types of spatial data. While raster data consists of organized cells with specific information, vector data is used for that data with discrete boundaries.

There is a difference in the manner of data representation between vector and raster data. Raster data has its data represented in a grid matrix or cells organized into rows and columns. On the other hand, information in vector data utilizes vertices or sequential points. Polygons, lines, and points are used to represent longitudes and latitudes in vector data.

Raster data is considered simple. It is not necessarily cheap, but the maintenance cost is a bit lower than that of vector data which is relatively expensive as they require high-quality colors for display.

Raster data is more vulnerable to information loss than vector data. This is because establishing network linkages can be difficult. Projection transformations become time-consuming when there lacks some special algorithms or hardware for the purpose.

Multiple advantages come with using vector data. Apart from making it easier to describe the whole typology, the graphics represented are accurate. Unlike in raster data, where the details might be slightly inaccurate, vector data is usually accurate. The limits that a raster cell dimension dataset might impose can lead to spatial inaccuracies. Restructuring data results in loss of precision, especially when it is conducted to a raster cell boundary that is regularly spaced.

Vector data maintains quality better than raster data. Unlike in raster data, where there is a loss of precision when changes are done, vector files represented by lines, polygons, and points can be easily scaled up and down and still maintain their quality. Vector files are more preferable when representing graphic assets like company logos, icons, and illustrations. The same file can be applied for different designs, for instance, mobile apps and large billboards, while maintaining high quality.

Raster data is more detailed because it represents square areas. In this case, they describe the interiors in detail rather than the boundaries of their representation which is the situation with vector data. Vector data are more preferable when storing captured spatial details, while raster data should be applied for analyzing stored data like temperature that vary with location. Satellite imagery and aerial images are also stored in the raster data format in the GIS. When the geospatial data needed is supposed to be more specific, raster data can be used, although it might not apply to all aspects, for instance, the latitudes and longitudes represented in the vector data.

Vector data and spatial data are primary structures of spatial data in the geographic information system. The nature of the data to be represented should be considered before choosing the structure to apply. Accuracy is a crucial factor as data restructuring in raster data can cause spatial inaccuracies compared to vector data which remains the same and maintains quality even after scaling is done. The representation of raster data is on a grid matrix, while vector data uses vertices or sequential points.

Applications of GIS in Asset Management