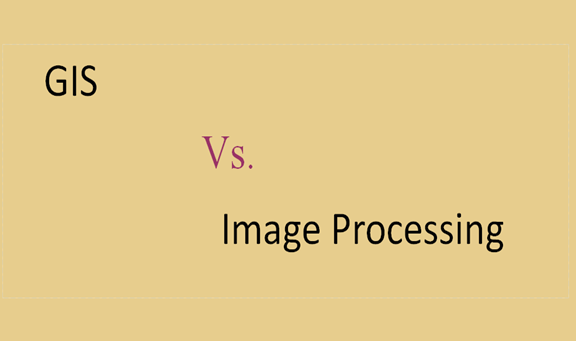 Earth’s surface and all features in it are essential components of human life, and thus studying more about them proves to be beneficial. Researchers develop many technologies, systems, and software to ensure this is achieved. This article shall discuss GIS and Image processing, which are key components in studying the earth’s surface.

Everything has a unique definition and explanation of what it entails, and the definition play a vital role in drawing comparison between two or more things.

GIS- initials stand for Geographic Information System, it is a computer system to analyze, gather, capture and manage geographical features.

Image processing- whereas this is a technique used to perform some operation on an image to get the desired image or obtain some information from it.

The two techniques are used to perform various tasks, and hence they differ greatly on how they work.

GIS- GIS is a technique or method used by researchers to process, analyze, and arrange spatial data. It is used to process all kinds of data or information, including images and visuals.

4. How they are made

GIS and image processors are manufactured in different ways that fit their operations.

During data analyses and other studies, simple information is needed, and thus, there is a need to break down complex data and reassemble it as required.

GIS- altering with original data in GIS may be difficult and tricky. This is so because the system does not allow editing of the original copy of the data. However, it may allow data processing which may be vital in data manipulation and simplification.

Image processing- image processors use complex algorithms and functions to simplify data. This technique is useful in many technology solutions. It is used to process and analyze images hence breaking them down to simplify the data.

6. The number of data processed per minute

GIS- as said earlier,
GIS is a system, and therefore, it is the ability to handle and process as much data and information in a given time. Thus, it has a higher computing speed per minute.

Image processing- most of the image processors work on the principle of time allocation technique. That is, the software can only process one image at a given time and cannot multi-task. In the case of many images, the software requires a lot of time, which may be viewed as time wastage to researchers.

During statistical analysis, various methods and techniques are relied upon to provide some information. However, a different technique may provide different types of data. This is the case with GIS and image processing.

GIS- GIS is equipped with a variety of data and information necessary during the statistical analysis. Most researchers rely upon GIs as the primary source of data.

In conclusion, during the data analysis process, GIS proves to be better than image processing.

GIS- GIS is a system, and therefore it has a more complex user interface. It has many information and data, and thus it requires more skilled personnel to understand and use the system.

Image processing- on the other hand, image processing involves a single software for analyzing images; thus, it does not have a complex user interface as it is in GIS.

Communication is the most important thing within a department or an organization. However, this tool may not be available on all software.

GIS- since it is a system, it is fitted with communication tools. It is pretty easy to use and communicate from one department to another, promoting interrelation among themselves and increasing productivity.

Image processing- the system lacks tools of communication. This downside makes it be complemented by other systems that are capable of communicating.

GIS- it has a compact design and can overcome many of the damages and risks that come it’s the way. This helps to ensure it has a longer lifespan.

Image processing- the resistance power of image processors, is lower as compared to that of GIS.

Difference between 2D and 3D GIS

What is Special Purpose Map – Definition in Geography